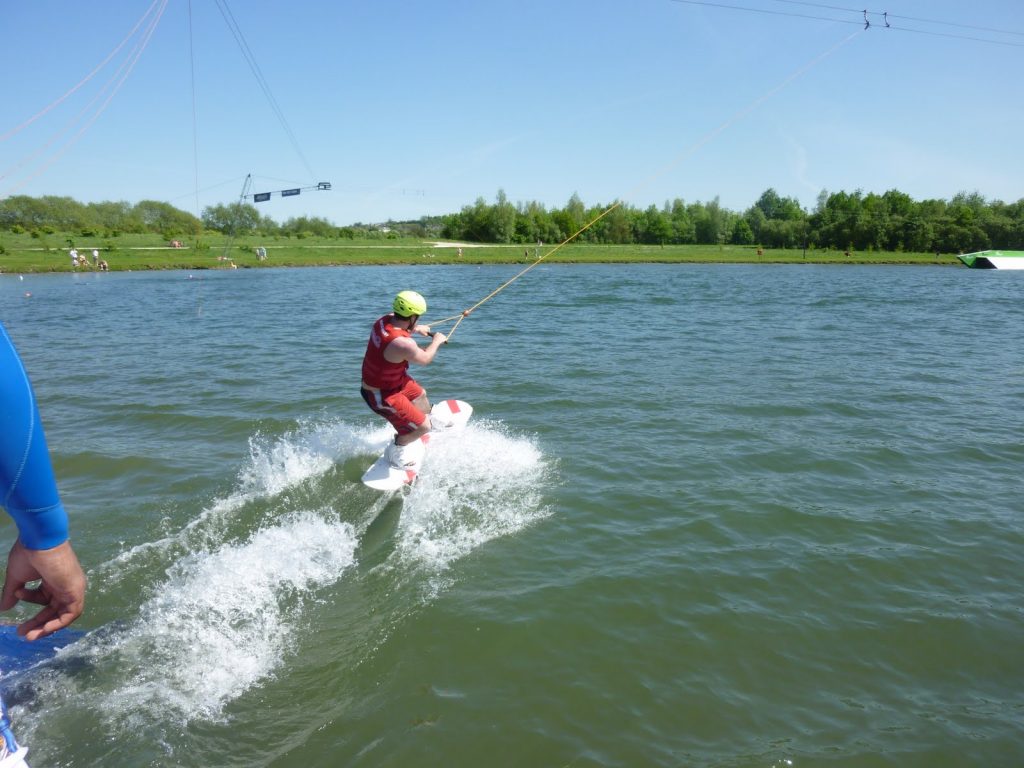 In the spirit of trying something new, we decided to try and organise a wakeboarding trip. We had been told it was much like snowboarding therefore I think it was inevitable that we would love it. Unfortunately due to the lack of money and the fact that trying this sport wasn’t cheap we only had a turn out of 4 which was somewhat a disappointing turnout but it made for a stress free weekend!

So there was Rick, Napper, Herring and me, with only Napper having tried it before, the rest of us were wakeboard virgins. We aimed to be there for 10am…which Rick did, and then we finally arrived at 11am…sorry Rick! The place didn’t open till 11am anyway so it wasn’t like we had wasted wakeboarding time. The sun was out and we were ready for anything!

We paid, got out rental stuff, life jacket, helmet and knee board and headed for our quick lesson. It all seemed pretty straight forward, to turn you lean your board! Next we had to line up and try it in front of everyone, you get pulled off a jeti and this is done by using a tow rope that is attached to a cable with 8 engagements on it, so only 8 people can go on at a time. The cable runs at 19 mph with 4 corners and it runs for about 0.45 of a mile (this was my estimation worked out from the time we got round etc).

Watching the other group of beginners getting pull into the water face first etc we started to worry a little bit, but when it got to us, we all got it fine, mastering the corners on the first go, which is the hardest bit about all of this! One thing we noticed by this point is that after your 3 laps of the cable, (only allowed 3 as it was fairly busy) your arms felt like they had just towed an elephant through some really boggy marshland…ie. knackered!

After a few goes, we decided it was time to try the real reason we were there, the wakeboarding! It cost us £35 each to use all the first lot of kit, with an extra £8 for hiring the wakeboard for the day. After watching the people on knee boards and the people on wakeboards, we realised there was a certain ‘cool’ element missing from the knee boarding, so desperately wanted to it with a wakeboarding so we could look as awesome as the other people there.

I know I am not fat-fat, but I know I have a bit of a belly, however walking into the wakeboarding place on a day with no clouds in the sky and near 30 degrees Celsius, I couldn’t help but feel a little inadequate…all the guys there were stacked with their 6 packs and arms as big as my head. Time to go on a healthy eating plan I think! As vein as it is, I would love to look like that and I am sure Ems wouldn’t complain either!

However before the inadequate feeling made me want to ride with my tee shirt on, we couldn’t help but notice the amount of extremely attractive girls dotted around the place, most of them with their ripped boyfriends etc, but for any single guys looking for a hot girl you should certainly look into the wakeboard scene!
Due to it being so busy, we could only get one board between 4 for the start of it, so Rick decided to head off and line up in the massive queue, telling the cable guy that he hadn’t done it before, he then got some tips and a bit of hand on set off, only for the water to grab his board and pull him under the water. Remember this is a sitting start onto a 19mph tow rope, it ain’t going to be easy!

Next Napper was up, and you could tell he had done it before, also he was at a slight advantage of being goofy so it was easier to set off…ahem…after one full lap he then fell off at the first or second corner, which is a long haul back, having to walk around the lake and back to the start. Due to Napper being Napper and being small, he didn’t do the bindings up tight enough and got pull out of them leaving him with EPIC injuries…ahem.

Next up was Herring, who managed the set off, only to fall on the first or second corner, again for the long walk back.

Next up was me, extremely nervous, chatting to the two people either side of me and asking for any tips I could use before I set off. The cable guy helped me and my turn came, heart pounding like crazy, the cable caught and off we went, not very smoothly but I got away none the less.

The feeling is fantastic, even if it does feel a lot slower than the knee board, it still felt amazing! You can carve etc so easily and just generally mess around, no tricks for me just yet though! Now, the corners are most peoples nemesis, I spoke to a few people who said that this was their 4th time and they still hadn’t managed a full loop due to issues with turning the corners!

The cable goes slack for a second and you have to go wide otherwise you will sink, you then have to turn your board and not catch an edge, almost every corner I did was sketchy. Anyway, I managed 3 laps on my first go and came to a dignified stop in the right place!

At this point I could understand what people meant about the corners being quite hard! All in all, I had an awesome day, got very sunburnt, had good banter and then headed for some sleep in the on-site camp-site.
My arms were a wreck, I can now appreciate why everyone of them wakeboarders have such toned bodies!

Anyone that is thinking about trying wakeboarding, just do it. The people are really laid back, we encountered a couple of obnoxious riders that were really good, but stayed on longer than their 3 laps and obviously knew they were good, but other than that, everyone was chatty, friendly and more than willing to give advice and share stories. 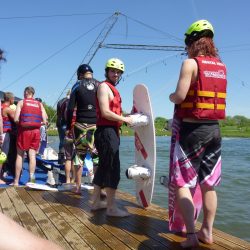 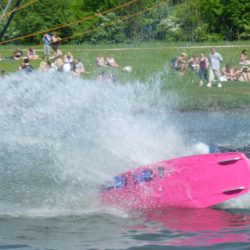