When you’re sat having a drink these things seem like a good idea and this is how our trip to the Macavalanche started. Along the lines of that looks mint….how hard can it be?

The drive up with Henry and Mike was as interesting as ever. As I was the driver I was allowed to drink Panche (0.005% shandy) whilst Henry and Mike got stuck into some Stellas. Edited highlights included: whats wrong with 3 grown men watching cirque du soleil; playing bump and grind to an elderly lady and about 47 piss stops! We arrived at our caravan late on Friday in time for some food, beer and bed. In that order!

Race day: up early for an 8am sign on with No Fuss Events https://www.facebook.com/nofussevents?fref=ts. This was not necessary!!! When we arrived the lifts weren’t on and everyone was having a coffee, so we followed the crowds. The one  thing we did notice was how big Glencoe was and how mental the end section of the new red run looked; who doesn’t like a 8ft gap jump to finish a race??!!

It took us nearly 50 minutes to get to the start line, via 2 chair lifts and a nice walk to the top! But what a place, it was wild, steep, rocky, sunny and generally mental. This was going to be great!! On our first practise run we took it slow and learnt that the course was quite hard to follow. You had to follow little orange flags which lead you to taped gates which you had to go through. This was not the ideal set up for me, being massively colour blind I couldn’t see the orange flags and kept missing the gates! What we learnt on practise one was that the course was long, technical and with a couple of lovely uphill sections thrown in for good measure. Practise run 2 went better with us dividing the course into three sections: top –start gate to boulder field, then a big drop onto the plateau below and then the big climb; middle – steep technical drop onto a fire track to get over to the red; bottom – a long babyheads section followed by some switch backs and then the new section of the red complete with jumps and berms!

After a sleep and some lunch it was race time! When you got to the start line you had to choose your start position, we did what every racer should do and sat down close the end flag, mainly because there was a gap there and we thought it would be less congested at the start! 5,4,3,2,1 and we were off. Riding down the hill with the rest of the field, people everywhere trying to get the best line. We were in the middle of the pack, with the pros and locals pushing ahead we battled with the weekend warriors racing for pride! The first section went well for me I passed some people and giggled as other fell off in the boggy sections. Then came the climb, I was buggered and got passed by multiple folks who had the lungs to peddle up hill. This meant that I was now chasing people who where fitter then me and on narrow sections of track, not ideal. I only managed to catch one girl on the red section and then I had a dual to the finish, but I was shut out on the line! BOOOO!

Heres a video of the race from someone else: http://www.youtube.com/watch?v=2miZzYWtoFM&feature=youtu.be

If its on next year, which is a big maybe you should go its great!!! 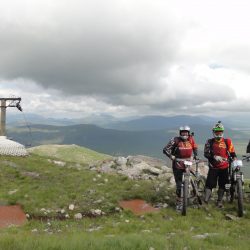 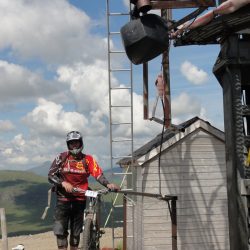 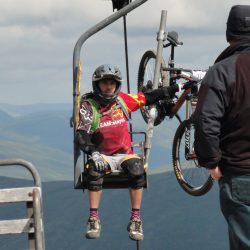