After Deciding to head to Austria for a week we finally set of. The vehicle
of choice was a bright yellow large Mercedes sprinter, This was perfect as
not only could we just chuck all our kit in the back but it was wide enough
to just grab a sleeping bag and go to sleep on the floor in the back then get
up for a walk to stretch your legs…

Anyways onto boating. As we arrived it was good to see some water as the UK
had been so dry for so long, as well as lots of water it was mostly nice and
blue. We could not wait to get on the rivers so we booked into our Chalet
(living posh is unusual for kayakers)and not even putting our kit into the
rooms we set of for our first river.

We headed to the Sanna which seemed a perfect option as it was a good warm up
river and was also getting dammed soon so wanted to get it done, however the
get off for this river was on the doorsteps of our Chalet. This did not take
long to do so the rest of the day we just chilled out and sorted out our beds
for the week.

Day 2, We had met up with someone who was already over there and had been
loads before so this was great for doing shuttles and getting to the good
rivers. We headed over to the Inn Shoot as when i went last year i did not
get to paddle it so this was a one i really wanted to do. Turns out we did
this about 5 times and i even got a solo run of the river as well while we
were there for the week. which you can see on this video
– https://www.youtube.com/watch?feature=player_embedded&v=xPh0EEYEr5o

When paddling the Shoot Dave had a small fright and decided to walk off, the
rest of the group carried on to the get off as Dave said he would meet us
there in the van. We got there and waited for a while and it was 2hours since
we left him and still no sign. Me and Richy drove up the the top and walked
down to try find him as he wasn’t on the road and his van was still at the
get on. We soon realized this was a large and steep forest that Dave was
trying to walk out of with his boat, We couldn’t even get to where Dave had
got out without boats so we called him over and over but no answer. As we
were about to paddle down to where Dave got off the river the phone called…
All was ok so we met up and found out what happened

As the forest was so big he had to leave his boat after walking around for
ages to try find a path. so me and Richy paddled down and tied it of so it
could not float away if water levels risen any higher. The next day i had to
walk down to the boat as the river was low and paddle Dave’s boat to the get
off. Throughout the trip this was the only epic that happened. (I did lose my
glasses on Sanna surf board which was also devastating) 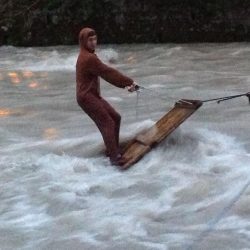 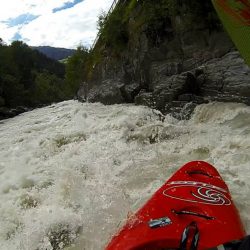