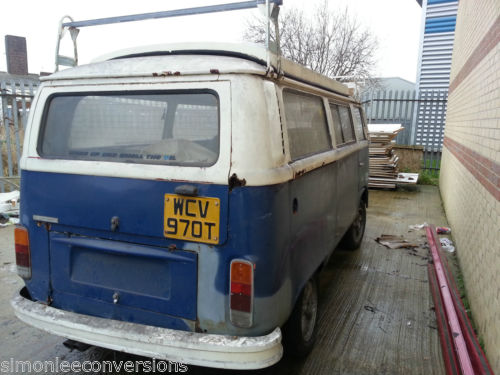 The following morning I woke feeling content in the drunk exploration of a dream and that it was remaining so.

I went to work early and spent the short shift in a daydream of VWs, adventures and oddly an episode of Poirot featuring Pete’s Dragon (please see previous post for reference).

I finished my shift at 10am and shortly after received a phone call from my Dad.
Now, I don’t know about anyone else, but my Dad never calls me so I assumed the worst and feared there had been a family illness, injury or little Timmy had fallen down the well again.

“Hey Dad, what’s happened? Everything OK?” I carefully enquired.
“Yeah, why wouldn’t it be?” he said. “I’ve been to see the bus!”
I must admit at this point that my ambitious choice of drink on a school night had me running a little on the back foot.
“Bus? Are you going somewhere?”, I continued.
“No, it’s over by B&Q”, he exclaimed.
At this point you may realise that although my dad and I are very close, our communication skills are a little flawed.

r another few minutes of deciphering why dad was going to B&Q by bus we landed on the same page and the penny dropped.

I hopped in the car and we drove straight over for a second viewing.

We went over, under and through the entire bus with a fine tooth comb. Prodded, pushed, kicked, shook and shimmied.

It rattled, creaked, crunched, cracked, leaked, scraped, squealed and had the potent scent of a million adventures (If the adventures were had in a damp mould factory).

Nothing worked, was safe or salvageable… Naturally I had to have it!