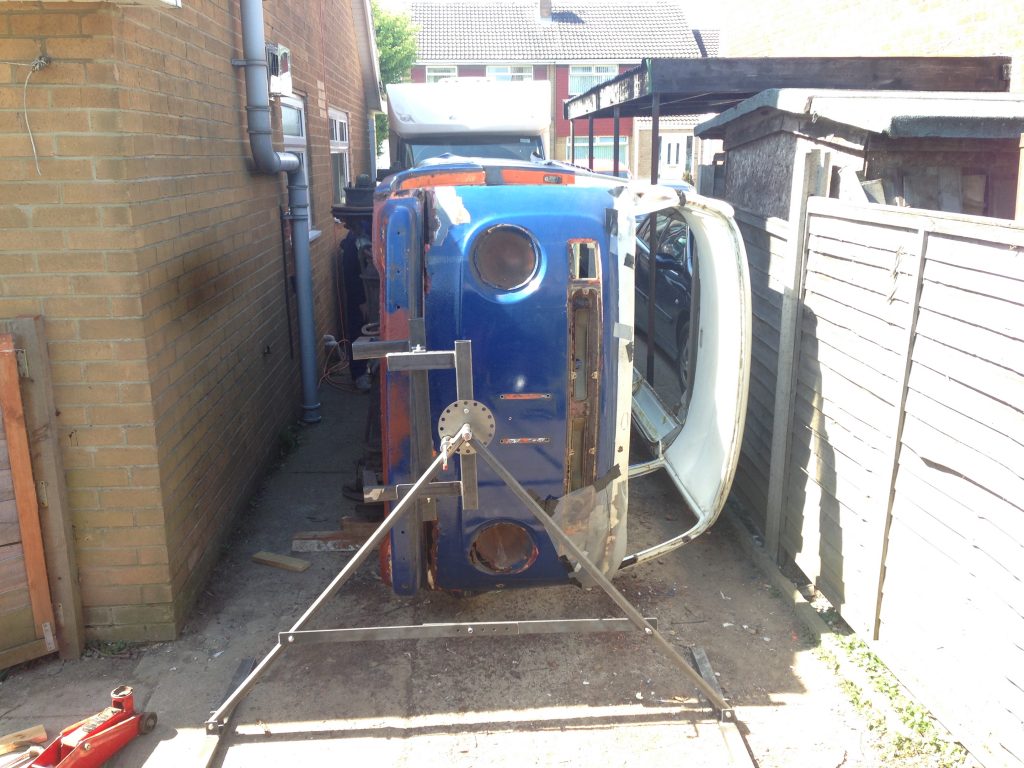 This chapter is also titled the “Learning to weld again” section.

The van was bare of all fixings, bar the wiring loom and a few other small things we did not fancy threading through the body again later on.

In front of me I had a list of all the sections of the van that needed welding to meet a safe and/or water tight standard. There was A LOT on this list and to save as much money as possible we were planning to fabricate our own panels as well as buy reproductions for the complicated areas.

From the start, Dad had said he did not want to be laid on his back under a van trying to weld a chassis…so after research we acquired a “Rolling jig”. What a genius purchase it was too! It made every inch accessible while stood upright. The downside to this was I was fast running out of excuses for my welding ‘skills’. (See pic at the top)

Up to this point my welding experience was on thick and clean metal on a horizontal surface with fixed settings on the welder. Turns out this was NOT an option with my bus…

Various thicknesses, rust, random angles, and forever having to be conscious of the welder settings was a steep and sudden learning curve.

To begin with, I made more holes than I filled and warped more panels than I care to admit. Welding 1mm panels was my new hell and there was an incredible amount of it to do.

Time and practise meant that after a few months we were sticking panels on all over the place. Often, where they were supposed to be stuck too. However this complacency lead to the regular phrase “Uh oh, van’s on fire again”. Luckily, it was usually just some old paint, under body coating or old filler…but still, not ideal.  There was barely a panel we did not repair or replace. Panels, chassis, axle, sills, window apertures, nothing escaped us.

Overall, everything took around 12 months of regular welding, and when I say ‘regular’ I mean around 25-30 hours a week spent fabricating and welding. I was there on every day off, between every shift at work and any other time I could gather. It was brutal and frustratingly endless, but we got there…

Time to spend months on filling and sanding! Whose ‘great’ idea was this again?